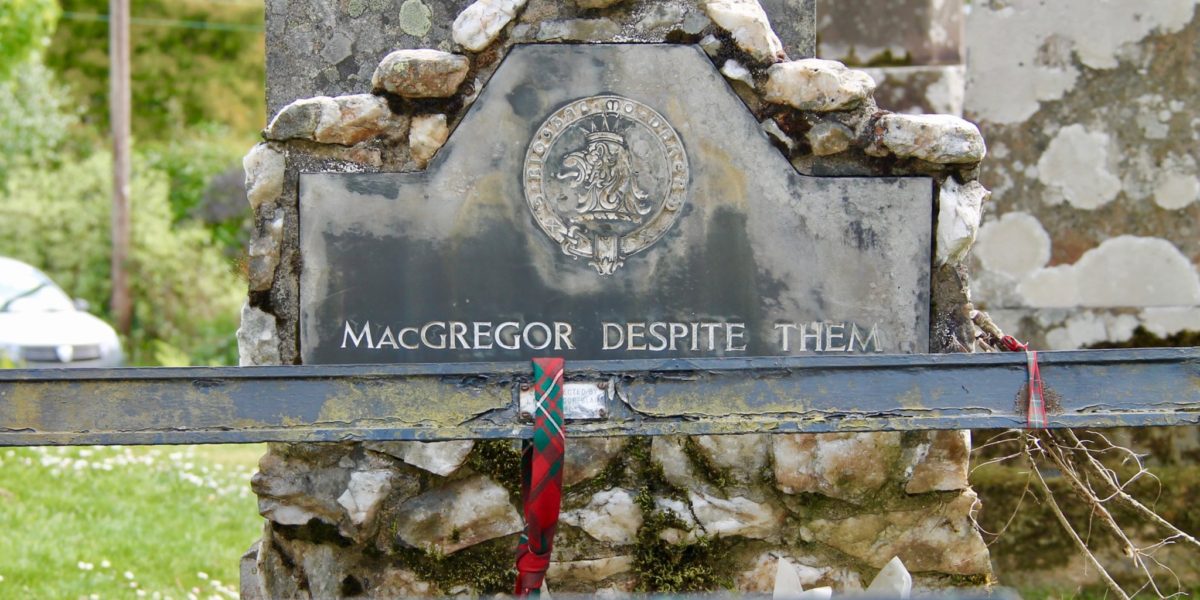 Visitors from all over the world travel to Balquhidder to see the last resting place of Scottish outlaw and hero, Rob Roy MacGregor. Named “Roy” (gaelic Rudh) due to his red beard, MacGregor was a thorn in the side of the establishment of his day, known for cattle rustling and later as an outlaw. He was stripped of his lands and his family name was banned. His gravestone bears the inscription “MacGregor Despite Them” in reference to this loss of his family heritage and his refusal to accept it. The 1995 film “Rob Roy” starred Liam Neeson as MacGregor in his battle against the Duke of Argyle (Tim Roth). There are many places from MacGregor’s life and the film that make for a great day trip for fans. But where are the real historical sites, and which are movie mischief?

Loch Leven – This freshwater loch is located in Perthshire. It is most well-known as the place where Mary Queen of Scots was held prisoner (at Loch Leven Castle on an island in the loch). She later escaped by disguising herself and a supporter of Mary managed to get her on a boat to safety.

FILM: Loch Leven is shown in the opening shots of “Rob Roy” as we see him trekking across the incredible landscape.

FACT: MacGregor was born by Loch Katrine and lived most of his life at Glen Shira in Argyll before moving to Balquhidder. He did however travel long distances herding cattle and the Rob Roy Way, from Drymen to Pitlochry, was named after him.

Drummond Castle – These amazing gardens date back to the 17th Century, and retain many original features. The terraced design offers a spectacular view as you enter through the gatehouse.

FILM: The castle was the location for the Marquess of Montrose’s castle. It features late in the film during a duel between the Marquess and MacGregor. Their feud begins when the Marquess lends money to MacGregor, who later falls into debt.

FACT: James Graham, 1st Marquess of Montrose, came to prominence through his involvement in the English Civil War, switching sides from the Covenanters to the Royalists. He was executed by hanging and quartering, though with the later re-establishment of the monarchy his status changed to that of a martyr and he was accorded a proper burial, his bones now lying at the High Kirk in Edinburgh. It is believed that James Graham was born at Mugdock Castle in 1612. Due to numerous sackings of the castle during its fraught history, it is now in ruins, but much of the initial building still remains. Following James Graham’s death, the family later moved their seat to Buchanan Castle, near Drymen. Both of these castles are located in Stirlingshire.

Glen Coe – The majestic backdrop of Glen Coe has featured in numerous films and television shows, from Harry Potter to Outlander.

FILM: In “Rob Roy” it is the place where MacGregor confronts a band of cattle rustlers.

FACT: Rob Roy MacGregor initially worked as a drover, driving cattle to market in Crieff. Later on, in retaliation for the way the Duke of Montrose had treated him, he turned to theft and cattle-rustling. His activities also included a protections racket, where he would demand payment from local farmers to “protect” their cattle from theft by his own band of men.

Rannoch Moor – Perhaps best known in film for the remote Corrour Station visited by the characters in “Trainspotting”, Rannoch Moor is on the route to Fort William from Central Scotland.

FILM: Rob Roy’s house is burnt down on this site

FACT: The ruins of MacGregor’s house at Glen Shira, where he retreated after being outlawed, still remain, though there is no bridge across the burn to the house as there once would have been. Following the Jacobite rebellion MacGregor moved to a site beside Loch Doine in Balquhidder.