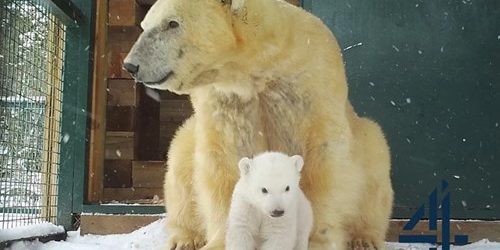 The first polar bear cub to be born in the UK for 25 years has emerged at the Royal Zoological Society of Scotland’s Highland Wildlife Park.
Previously, the birth had only been confirmed by high-pitched noises heard from the maternity den. Now the cub’s first venture into the outside world has been caught on cameras installed by STV Productions during a two-year exclusive project to document the breeding and birth of the cub.
The cameras have been positioned outside the female polar bear’s den since early February, giving unprecedented access for a forthcoming documentary, made for Channel 4 by STV Productions, about the park’s pioneering polar bear breeding programme.
The cub was born in the week before Christmas, with mum Victoria having mated with Arktos, one of two male polar bears at the park, at Kincraig near Kingussie.
Victoria and her cub’s enclosure will remain closed to the public until late March to ensure privacy. Arktos can still be viewed in the enclosure he shares with Walker, the park’s other male.
Una Richardson, head keeper responsible for carnivores, said, “Victoria had started to come outside by herself for short periods to eat, drink and roll around in the snow, so we knew her cub would soon follow her but we couldn’t be sure when.
“I was visiting Victoria on Sunday morning to check she had fresh water and to continue slowly reintroducing food to her diet, after four months during which she lived solely off the fat reserves she built up before she entered her den.
“Suddenly I saw a small, fluffy bundle next to her and had to pinch myself to check I wasn’t seeing things. It was a very special experience and one I’ll never forget. We also have motion-sensitive cameras safely positioned near Victoria’s den and we were delighted to see we had captured her cub’s first few steps outside.
“Having only been able to hear sounds from inside the den before, we can now be certain Victoria has had one cub rather than two and we couldn’t be happier as this is the moment we have been working towards and really looking forward to.
“Both mum and cub appear to be doing well, though this is still a sensitive time and they need as much peace and quiet as possible. Our keeper activity at their enclosure will remain at a minimum for the next couple of weeks, after which visitors will be able to see Victoria and our wonderful new arrival.
“In the coming weeks we’ll also be able to find out if we have a little boy or girl and then we’ll decide on a name.”
We said in our blog on 7th January that the Highland Wildlife Park were excited by the news that a cub had been heard in the den and here several weeks on the the first sightings have taken place.For more information visit the Highland Wildlife Park website at highlandwildlifepark.org.uk.