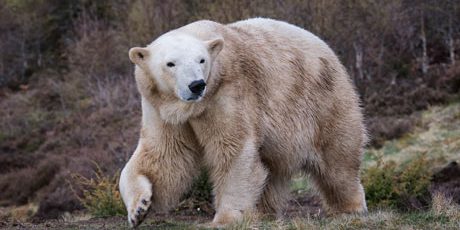 The Royal Zoological Society of Scotland (RZSS) can announce that its resident female polar bear Victoria has given birth at the Highland Wildlife Park. It is the first time a polar bear cub has been born in the UK for 25 years.
Describing the birth as an “outstanding achievement which will have interest across the world”, the charity stressed that the first three months are perilous for polar bear cubs, whether wild or captive born.
Staff at RZSS Highland Wildlife Park, at Kincraig near Kinguissie, confirmed the birth having heard distinct high-pitched sounds from Victoria’s maternity den, which remains closed to visitors to ensure privacy.
Una Richardson, the park’s Head Keeper responsible for carnivores, said, “We first heard promising noises in the week before Christmas and these have now continued into the new year. Because we don’t have sight inside her cubbing box we can’t be sure if Victoria has had more than one cub but we can confirm the birth.
“While we are absolutely thrilled, we are not celebrating prematurely as polar bear cubs have a high mortality rate in the first weeks of life due to their undeveloped immune system and the mother’s exaggerated need for privacy, with any disturbance risking the cub being killed or abandoned.
“We will continue to monitor Victoria and very much hope for the best possible news when she emerges around March. Until then, Victoria’s enclosure will be closed to the public and keeper activity will be at a minimum to give her offspring every chance of survival.”
New-born polar bear cubs are blind, around 30cm long and weigh little more than a guinea pig. They only open their eyes when they are a month old and are entirely dependent on their mother, feeding on fat-rich milk to grow quickly, weighing around ten to 12 kg by the time they leave their den.
Douglas Richardson, Head of Living Collections at RZSS Highland Wildlife Park, said, “The arrival of a polar bear cub is a tremendous husbandry accomplishment for our team.
“When Victoria arrived here in 2015 it was another tangible step in RZSS developing a new method of captive polar bear management, by providing a naturalistic habitat in a climate that is not so different from the one they have evolved to cope with.
“This success has been based on a radically different approach to their care and husbandry to mirror what would happen in the wild.”
The polar bear breeding season began in March last year, during which Victoria mated with Arktos, one of the park’s two males. Arktos and Walker, the park’s other male polar bear, are hugely popular with visitors and the enclosure they share remains on view.
Barbara Smith, RZSS Chief Executive, said, “The birth of the first polar bear cub in the UK for a quarter of a century is an outstanding achievement which will arouse interest around the world. It is testament to the commitment and professionalism of our team and hugely exciting.
“At RZSS we believe we have a duty to help protect this magnificent species, with the reduction in sea ice, the polar bear’s primary seal hunting platform, predicted to significantly reduce numbers over the next 40 years.
“Our polar bears are part of the European Endangered Species Programme and we hope Victoria’s offspring will survive to reinforce the captive population, which may be needed in the future to augment and help restore a markedly reduced and fragmented wild population.”
The Highland Wildlife Centre is located at Kincriag and is about a two hour’s drive from any of our self-catering holiday cottages and a visit to the Centre would make for a great family day out while staying here in central Scotland.

For more news and information about the Polar Bear cub and what else to see at the Highland Wildlife Centre visit the website at https://www.highlandwildlifepark.org.uk.