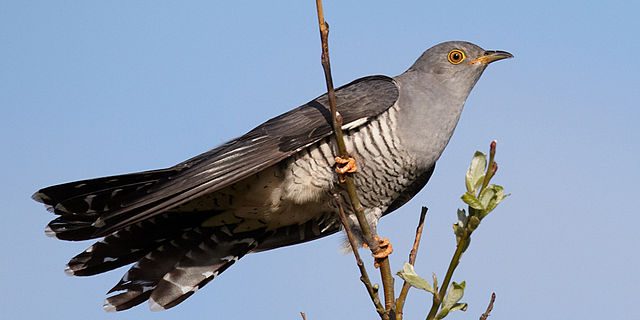 It’s the 1st April and the first cuckoo has been heard this morning having arrived back in Lochearnhead for the summer.
The cuckoos are generally medium-sized slender birds. The majority are arboreal, with a sizeable minority that are terrestrial. Some species are migratory and feed on insects, insect larvae and a variety of other animals, as well as fruit. Many species are brood parasites, laying their eggs in the nests of other species, but the majority of species raise their own young. In Greek mythology, Zeus transformed himself into a cuckoo so that he could seduce Hera.
Cuckoos have various strategies for getting their egg into a host nest. Different species use different strategies based on host defensive strategies. Female cuckoos have secretive and fast laying behaviours, but in some cases, males have been shown to lure host adults away from their nests so that the female can lay her egg in the nest. Some host species may try to directly prevent cuckoos laying eggs in their nest in the first place – birds whose nests are at high risk of cuckoo-contamination are known to mob cuckoos to drive them out of the area. Female parasitic cuckoos sometimes specialise and lay eggs that closely resemble the eggs of their chosen host. Some birds are able to distinguish cuckoo eggs from their own, leading to those eggs least like the host’s being thrown out of the nest. Parasitic cuckoos that show the highest levels of egg mimicry are those whose hosts exhibit high levels of egg rejection behaviour. Some hosts do not exhibit egg rejection behaviour and the cuckoo eggs look very dissimilar from the host eggs. It has also been shown in a study of the European cuckoos that females will lay their egg in the nest of a host that has eggs that look similar to its own. Other species of cuckoo lay “cryptic” eggs, which are dark in colour when their hosts’ eggs are light. This is a trick to hide the egg from the host, and is exhibited in cuckoos that parasitise hosts with dark, domed nests. Some adult parasitic cuckoos completely destroy the host’s clutch if they reject the cuckoo egg. In this case, raising the cuckoo chick is less of a cost than the alternative—total clutch destruction.
The parasitism is not necessarily entirely detrimental to the host species. A 16-year dataset was used in 2014 to find that parasitised crows’ nests were more successful overall (more likely to produce at least one crow fledgling) than cuckoo-free nests. The researchers attributed this to a strong-smelling substance secreted by cuckoo chicks when attacked that repels predators, and commented “Interactions that have been clearly classified as ‘parasitic’ or ‘mutualistic’ might be more complex. Perhaps we need to look more closely at these interactions before giving species such tags or labels”.

Our area of central Scotland is rich in wildlife and many great family days out can be enjoyed exploring the area watching for our great variety of birds and animals.
The Loch Lomond & The Trossachs National Park produce a variety of publications to give visitors information on where to go to see our wildlife.cuckoo, lochearnhead, cooper cottages,