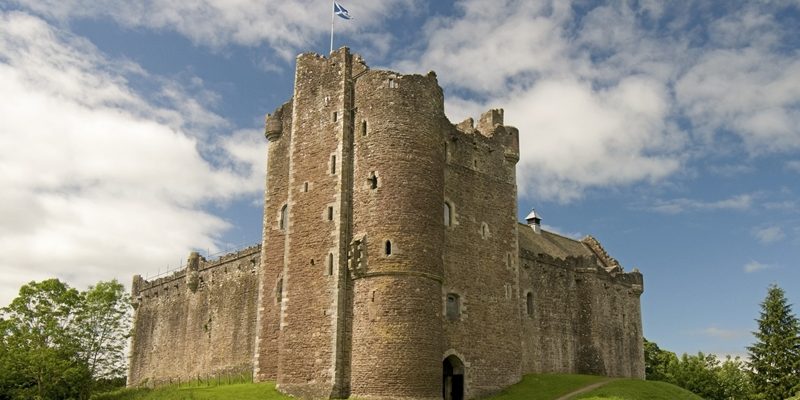 Outlander has taken the world by storm since the first series began in 2014. People have been captivated by the romance of Claire and Jamie, making stars of Catriona Balfe and Sam Heughan. Based on the popular series of books by Diana Gabaldon, fans are eagerly awaiting the premiere of Season 6 next week, which will see the continuing adventures of our time travelling heroine and her highland love. If you can’t get enough of Outlander then a visit to some of the filming locations in Scotland is surely in order. Shooting took place at a variety of locations across the country, from stately homes, to lochs and castles. We discussed some of these in our blog on Season Four Filming Locations https://coopercottages.com/outlander-season-4-filming-locations/. Others include Drummond Castle Gardens, Loch Katrine and Callander House in Falkirk.

In this blog we’re going to take a look at Doune Castle, the site of Castle Leoch, the seat of Clan MacKenzie in the show. Doune Castle has featured in several films and television series. For many years it was best known as a location for the filming of Monty Python and the Holy Grail, where Arthur and his knights are rudely dismissed by the French occupants of the castle. It played Winterfell, home of House Stark, in the pilot episode of Game of Thrones, and more recently appeared in the film Outlaw/King starring Chris Pine as Robert the Bruce.

Doune Castle appears several times in Outlander, both in the past and when Claire and Frank visit the ruins of Castle Leoch. The courtyard, great hall and surrounding grounds were all used in the show. A replica of the kitchen was built as a set due to difficulties filming on site. Visitors to the castle can enjoy an audio tour, with Sam Heughan talking through some of the scenes that were filmed here and there are a number of information points signposting sites of interest. Nearby Doune Castle is Deanston Distillery, which also featured in the show as a French wine cellar.

If you want a packed Outlander-themed itinerary, Visit Scotland have created a handy interactive map that shows many locations used in the show. You can also download a free copy of this map for your trip.

Interestingly, the real seat of Clan MacKenzie is Castle Leod: a fact that author Diana Gabaldon was unaware of until after she had created Castle Leoch.