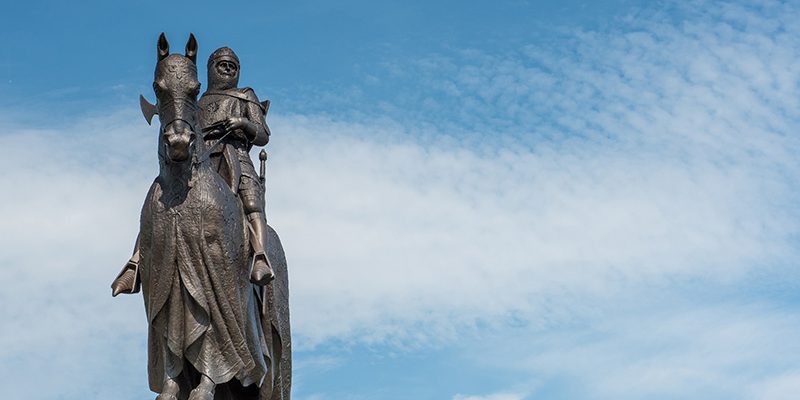 Using 3D screens and an interactive battle map, the Battle of Bannockburn Centre takes you back in time to this pivotal event in Scottish history. Established near the site of the battle the centre boasts a unique experience, with holograms bringing the past to life. The main focus is the battle room, where you can command the forces of English and Scots troops and relive the fighting. A short walk from the centre is a statue of Robert the Bruce, whose story was recently retold in the film “Outlaw/King”. There is a café and shop on site. The Visitor Centre is all on one level with accessible facilities making it a great day out for everyone. Visit the website here for more information.

On 23rd June 1314,the army of Edward II arrived to break the siege of Stirling Castle. His force, the largest ever marched to Scotland at that time, came face to face with Robert the Bruce’s smaller force. Little archaeological evidence remains from the battle, but historical records and contemporary sources tell of a brutal encounter. Though smaller in size, the Scottish army’s morale was higher and they were well organized and loyal to their commanders. After initial skirmishes, the English retreated. During the night, the English crossed the River Bannock. At dawn on the 24th June 1314, Bruce, holding the higher ground, pressed his advantage, advancing down the hill and driving the English forces back. Soon it was a full rout and few English escaped with their lives. This victory opened England up to raids in the north and finally to the Declaration of Arbroath, which proclaimed Scotland’s independence.