A small village 5 miles North of Crianlarich in the heart of hillwalking country around Glen Lochy. It lies in Strathfillan, at the southern edge of Rannoch Moor. The name translates as “the house on the ridge” and is of Gaelic origin. The village is overshadowed by the Munro, Ben Lui. Tyndrum lies within Breadalbane, The High Country, and is characterised by long glens and the surrounding open upland hills with their peaks, rocky outcrops, gullies and screes. Key hills include Ben Lui, Ben Oss and Beinn Dubhchraig (all Munros), to the south of the village. The open upland hills dominate the upper reaches of the glens forming high rocky summits and ridgelines, with a feeling of wildness, remoteness and exposure. Hillwalkers travel from near and far to explore the area and witness its beauty

Tyndrum is built over a battlefield. The battle of Dalrigh, where Clan MacDougal defeated Robert the Bruce (made famous by the 1996 film Braveheart) and took the Brooch of Lorn from him, was fought in 1306 AD. It is said that to allow for a swift retreat, the King threw his sword into a nearby Loch and ordered his men to discard their heavy weaponry into it. The Loch is now aptly-named “The Loch of the Legend of the Lost Sword”, after Roberts own massive sword that was reputed to have been over 6 feet in length. A small stone bench is now placed on the West Highland Way at the site of the battle. It is also reported that another famous Scottish figure, Rob Roy (also immortalised in film) had a close call escaping from the rear window of the local village Inn whilst his pursuers entered via the front door. 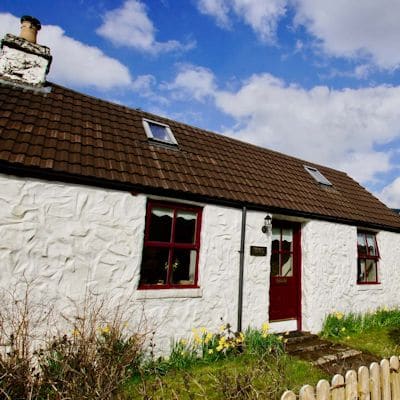 The origins of Tyndrum are thought to lie in the convergence of old drover routes, as well as lead mining. There was also a short gold rush in the area in the early nineteenth century. It was formerly a mining centre in the 1800s with a lead mine situated on the Sron nan Colan hill above the village. The remaining scar on the hill gives evidence to the extent of the mining. The tiny hamlet of Clifton (the row of cottages just off the A82 opposite the village centre) is the original cottages built to house the newly arrived miners. There are precious metals in the hills surrounding Tyndrum and a gold mine situated 2 miles to the south-west of Tyndrum at Coonish Farm. This was originally built in the 1980s, but economic conditions at the time meant the mine never became operational. However, given the huge increase in global commodity prices in recent years, an application was made in Oct 2011 to re-open the mine. Gold panning is allowed and proving increasingly popular in the local area. You can hire Gold panning equipment at By The Way if you want to try your luck in one of the local rivers. The development of the railway also brought further expansion to the village.

Today Tyndrum is an important transport hub with both the A82 and the West Highland Line branching off to other parts of Scotland. The West Highland way also passes through Tyndrum and is popular with tens of thousands of walkers who travel the route every year.  Tyndrum is also the smallest settlement in the UK with more than one railway station.

Things to Do in Tyndrum

Terrain – Extremely boggy path on the approach. Higher up the going is drier; the ridges are broad but rocky and undulating and with some crags- confusing terrain in poor visibility.

West Highland Way
Tyndrum to Inveroran – This is a shorter and easier stage; staying on the glen floor after the initial climb from Tyndrum, together with the road and railway, to reach the Bridge of Orchy, with fine views of the steep grassy mountains along the way. From there the route climbs through the woods to cross a low ridge before descending to the lonely hotel at Inveroran.

Terrain – Easy walking through the Glens to Bridge of Orchy, then a short climb over a low ridge.

Oban
A small town approx. 36 miles from Tyndrum. A scenic train journey from Tyndrum, or 50 mins by car. Attractions include The Oban Distillery, Dunstaffnage Castle, Dunollie CastleCathedral of St Columba and McCaigs Tower.

Ice Factor (Kinlochleven)
37 miles from Tyndrum, Ice Factor is home to the largest indoor ice climbing wall in the world. The facility also offers rock climbing, Aerial Adventures with a course circuit of 250m, and mountaineering courses with expert instructors.